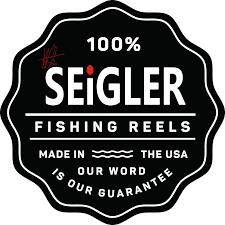 Just what we like to see, some innovative fellows who like to fish with creative minds occupied in designing a better mousetrap…or fishing reel. I had been following Release Reels for 2 or three years prior to adding them to our site & shops May of 2013. They finally have things together, and we’re very proud to bring their new gear to your attention. Expect this to be the tip of the iceberg, there are more things planned… 100% Designed, Machined and Assembled in Virginia, USA!

In 2015 the folks at Release had to make a decision to change their name. Seems there’s another firm making fighting chairs under the Release name. Our reel guys could fight it, and spend upwards of 100K or take the path of least resistance and simply change their name to something more in keeping with who they are. Truth was the name…for about a year before another firm took issue with these folks making use of the word Truth. So, back to building a new name, but not the reels are known entities and very much appreciated regardless of name. Easiest and safest bet, the owner put his name on the sideplate – and that really makes a lot of sense. As a friend of mine from Louisiana once told me, “My dad taught me one rule. The only thing you own is your name, a promise made is a promise kept.” (Joe Shabe, New Generation, Baton Rouge 1984) The reels are now known as SEIGLER.

Seigler Reels are designed for fishermen by fishermen – now that’s an old line, but very true with respect to these guys. Like some of our other favorite firms such as Accurate, Tiburon and of course Avet, these guys have a machining background and they took those skills, a dream and turned their concept and applied creativity into creating a new fishing tool for us.

In 2014 Truth/Release moved to a new larger facility, expanded their machining capability with some additional hardware and CNC machines and set the stage for future growth. From the first reels we received I’ve noticed continued improvement in the subtle areas we wanted to see. They added a dog to the bearing for the anti-reverse, improved freespool performance and in 2014 created a new soft grip round knob that’s both unique and a pleasure to use. (Note the comparison image of the main gears on the image right – The tiny SG offers a larger and more capable gear than the comparison reel which is quite larger. Larger gears, more precise cuts, more powerful AR – note the cuts on the inside lip of the gears verses near the shaft. By design, greater strength and less slop.