Like the aerospace-type designers they are, Accurate approached creating a fishing reel with uniquely clear vision and a good dose of common sense.  Accurate came up with a logical way to solve an inherent design weakness with all conventional fishing reels. Instead of applying drag pressure on one side of the reel's spool, Accurate reels feature TWIN-DRAGS.   Yep, drag pressure is applied evenly on both sides of the spool.  And for the same reasons you don't just put brakes on one side of a car, applying drag pressure evenly makes for a much better fishing reel.  There's another benefit, DRAG WEAR and HEAT. Since drag pressure is exerted on both sides, less drag pressure needs to be applied on each side of the reel.  For 20# of drag, you'd effectively need to apply 10 lbs. of drag on each side of the reel.  This means besides smoothness, you'll experience less heat build-up and resultant loss of drag performance.Read More...Read Less... 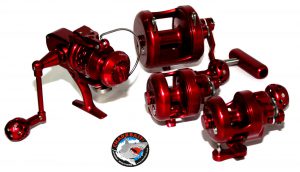 Another point that influenced Accurate's designs: They entered the reel market after Izorline's Spectra was well established with the Long Range guys.  Given Spectra's thin diameter, it became popular to use heavy line on smaller more comfortable fishing reels and still maintain good line capacity. The reels had to be strongly overbuilt, or things could literally "come-apart".   Spectra kind of pushed all the gear up one line class or two.  In many cases, even a top quality reel would have to be modified by Cal's or Cofe to maintain freespool, because the reel wasn't initially designed for what Spectra has now made possible in terms of drag setting.  Accurate recognized the potential of Spectra, and designed their reels to maximize it's best properties.  Accurate has created a full series of TwinDrag reels now, and they represent the pinnacle of performance.
If ever a line of reels was designed for the long range fisherman, this is certainly it.

Accurate  spent a great deal of time testing the product, putting their reels through lots of use with the San Diego Long Range fleet, among other demanding markets.  As a result, Accurate designed their reels in uncompromising fashion.   The components are the best you can buy, the best bearings (6-7 ABEC Class 5 bearings!), the best aluminum, the best anodizing...not to mention, the best design with TWIN-DRAG balanced fish fighting working for you.  Accurate has made major enhancements to their reels since their introduction.  The Accurate reels are well worth owning. Their technology is proven - and it's GREAT STUFF!

Options on All Reels!